Empty the Tanks - the campaign to end the captivity of cetaceans

Saturday 24th May, marked the 2nd Empty the Tanks Worldwide protest where people in many locations around the world gathered to raise awareness about and gain support for the campaign to end the captivity of cetaceans.

I attended the event in Leicester Square, London, along with approximately 150 other protesters armed with banners, posters, leaflets and inflatable whales. We roamed the Leicester Square area trying to engage the public on this issue and to gain pledges to never visit whales and dolphins in captivity; queues meant ‘captive’ people so were a good place to start. One young girl had asked her mum if she could come to the event as part of her special birthday weekend treat in London – lovely to see such passion and commitment in someone so young but at the same time so sad that children are worrying about an industry that should not exist. 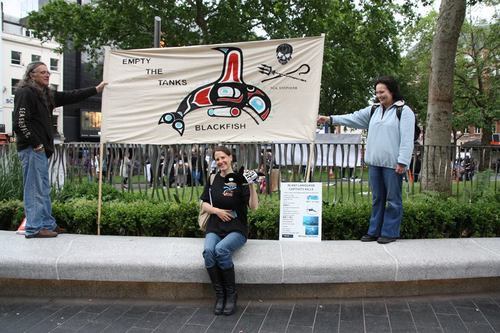 Most people we came across nodded in agreement when we said that whales and dolphins do not belong in captivity, which was encouraging. Quite a few people agreed that the tanks should be empty but expressed opinions that those animals currently in marine parks would have to stay there as they wouldn’t survive in the wild, highlighting that there is a significant misunderstanding about the options for these animals. Some people believe that the alternative to captivity is to release the animals out into the wild and they are rightly concerned that if that were to happen the animals might be unable to fend for themselves and would die. This shows that they are unaware of the rehabilitation plans that would be involved in the retirement of these animals. They would not be subjected to a sudden change from captivity to release, rather the plan for each animal would be carefully tailored for that individual – some might be able to be fully released after a period of rehabilitation and would rejoin their families whereas others might never be able to be fully released and would require some human input for the rest of their lives.

The next day the results of a poll were announced – an independent survey of 2,050 people revealed that a staggering 86% would not wish to visit a marine park to see whales and dolphins as part of an overseas holiday. Respondents were asked the same question at the beginning of the survey and again at the end, after having read a short statement setting out facts about wild and captive whales and dolphins. When first asked, 61% responded that they did not wish to visit an overseas marine park to see whales and dolphins. Of those who declared that they would visit, 64% changed their minds after reading the factual statement. The survey will be useful in the campaigns against captivity as it counters the claim often made by tour operators that demand hasn’t changed. 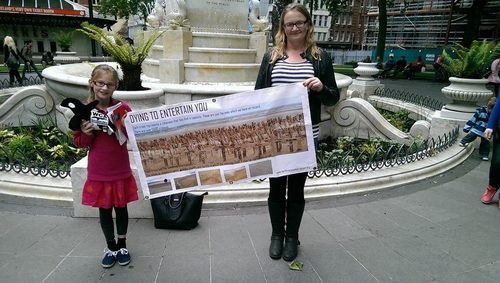 Empty the Tanks is an annual event and growing, and together with the results of the poll, reflects the increased focus on this issue and the growing movement of people taking a stand against keeping cetaceans in captivity.