Traditionally, projects run by charities to help horses and donkeys in developing countries have focussed on providing access to veterinary treatment that would otherwise not usually be available. Typically static or mobile clinics are set up so that owners can take their animals for veterinary treatment and also prophylactic care such as worming and vaccinations. Common issues are lameness, colic and harness wounds. However, the past ten or so years has seen a movement away from this approach because it does not address the cause of the problem, but treats the symptoms, and as such doesn’t prevent suffering or improve the day-to-day lives of the animals. All the major equine welfare organisations have now moved towards community-based approaches to improving animal welfare by engaging with equine owners to explore the difficulties they face and to test potential solutions that will result in improvements for the animals.  And it is working.

For example, the Change For Animals Foundation (CFAF) supports the Cambodian Pony Welfare Organisation (CPWO) who have been working with pony-owning communities since 2007. The CPWO team takes time to get to know the owners and the issues they face trying to earn a living, feed their families and look after the ponies upon which they rely. CPWO facilitate community discussions and activities through which information is shared and changes planned. There have been steady changes in the way the owners are working and caring for their animals – for example in 2007 it was very rare for ponies to be given access to water when stabled but in 2014, in the communities CPWO has been working in the majority of ponies have access to water when stabled. The owners have great pride in the changes made and a real desire to share their knowledge. CPWO is currently undertaking an impact assessment and documenting the changes, and results are so far very encouraging. By working with communities, rather than condemning them, the lives of ponies across the country are improving. 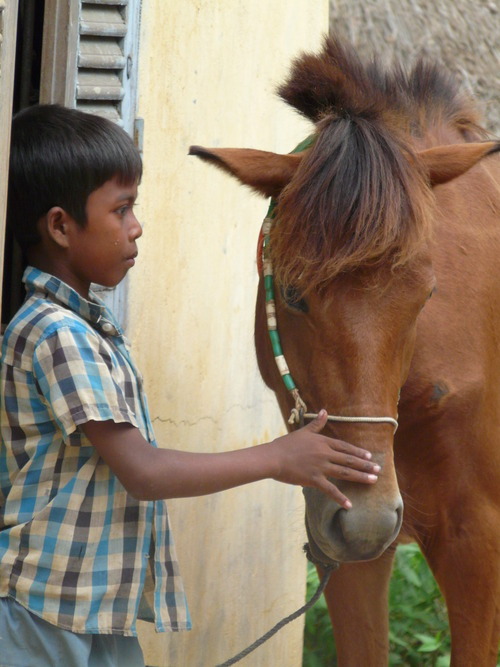 CFAF’s partnership with the CPWO rewards the owners who make changes for their ponies by funding a scheme whereby they can receive certificates as a pledge of their ongoing commitment. In addition, more significant changes to the pony’s welfare are rewarded with small useful items such as hoof picks, fly fringes, brushes and buckets (only very basic items but each cost more than a day’s earnings for many owners).

However, you don’t have to travel to Cambodia, or any other developing country, to find marginalised horse-owning communities with animals that are suffering. Here in the UK there are significant welfare issues for horses across all sectors of society. High-value competition horses are often stabled all the time, deprived of the ability to socialise with other horses, or perform fundamental behaviours such as grazing. And there are impoverished communities who, due to both cultural traditions and lack of resources, are responsible for equine welfare problems.

An innovative project in Wales has recently been launched that truly engages communities to improve equine welfare in a collaborative effort involving a variety of stakeholders. The Cyrenians Horse and Pony Scheme (CHAPS) works with communities in South Wales to improve welfare standards and best practice. In this area of Wales over-breeding, fly grazing and lack of veterinary treatment are the main causes of welfare problems for the urban horses and ponies living here. They are typically owned by impoverished communities who traditionally trade horses and keep them for recreational purposes. But with the decrease in demand for horses, the economic downturn, and available land for grazing in decline, communities are left struggling as their traditions and livelihoods seem in conflict with modern life.

The communities are aware that they need to comply with the recent Control of Horses Act 2014, and are aware that the way they keep horses is causing suffering and is the cause of conflict with the wider community but are unclear as to what alternatives there might be and therefore appear resistant to change. Through providing informal and accredited  educational opportunities both at a static centre and in the communities themselves, CHAPS is able to help the communities apply their valuable traditional horsemanship knowledge and culture of horse ownership in a way that will work in modern society and improve the welfare for the animals in their care. One of the horse owners explained how the project has helped him and his horse “The RSPCA came out twice about my mare and I had to pay for a vet to come out. The information that CHAPS gave me about worming made me realize that I had not wormed for tape worm as I thought all wormers did the same stuff. My mare is much better now and no longer in the radar of the RSPCA she has gained weight and is looking great. This information is bloody brilliant. Thank you“.

Other approaches have been tried, and are still ongoing, in this region. Some people who are concerned for the welfare of horses in these communities are campaigning for the communities to change their ways but rather than collaborating with them are condemning their practices. Change For Animals Foundation (CFAF) believes that this is counter-productive and will set back progress for animal welfare in the long run. If we are to learn from all the projects around the world that aim to improve welfare, whether for adults, children or animals, working with the community rather against them is the way to get results. There is a saying ‘Seek first to understand, then to be understood’ (Stephen Covey) that is pertinent here and CHAPS is certainly putting that into practice and as a result are being understood and horses are benefitting and will continue to benefit as this project continues and develops. We at CFAF wanted to mark the launch of this well thought-out project with this blog and hope you found it interesting.